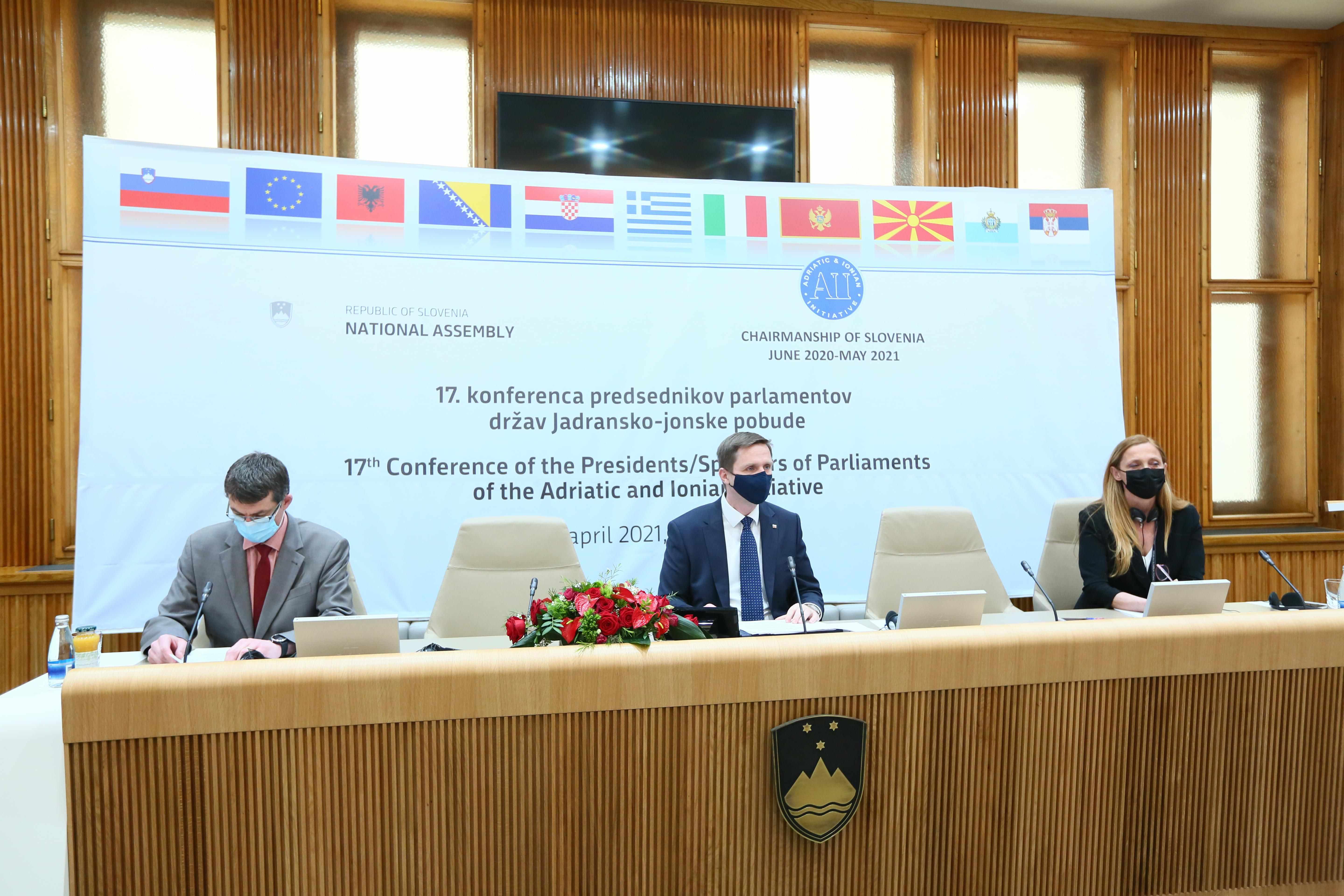 On 15 April 2021, the National Assembly hosted the 17th Conference of the Presidents/Speakers of Parliaments of the Adriatic and Ionian Initiative (AII), organised in the framework of Slovenia’s one-year AII Chairmanship (from June 2020 to May 2021). Considering the epidemiological situation, the event took place online.

The conference was opened by the President of the National Assembly Igor Zorčič as the current Chair of the AII Parliamentary Dimension. The participants were addressed by the President of the Republic of Slovenia Borut Pahor (Address), the State Secretary at the Ministry of Foreign Affairs Gašper Dovžan who presented Slovenia’s one-year Chairmanship of the AII and the EU Strategy for the Adriatic and Ionian Region (EUSAIR), and the AII Secretary General Amb. Giovanni Castellaneta (opening remarks). Among the keynote speakers were the Slovenian Minister of Public Administration Boštjan Koritnik (Speech), the UniAdrion President and Rector of the University of Primorska Klavdija Kutnar, and the Chairman of the Board of Directors of the Slovenian Digital Coalition Igor Zorko.

The participants discussed the development of digital society, focusing on the opportunities and pitfalls that the accelerated digital transformation brings to the younger generation entering the labour market. They also touched on the current situation of young people and their future prospects, including the creation of employment opportunities and better conditions for a successful life and work in the Adriatic and Ionian region.

According to President Zorčič, today's conference provided an opportunity “to show the importance of cooperation, solidarity and exchange of views at the interstate and interparliamentary level, especially in these difficult times when human health is at risk and circumstances prevent us from meeting in person”. The development of a digital society in the context of opportunities and pitfalls for the younger generations was not only the central topic of the conference, it is the challenge of our time and, as such, also one of the priorities of Slovenia's upcoming EU Presidency. President Zorčič sees the main contribution of today's debate in the awareness of the complexity of digitalisation. Together with other high representatives of parliaments, he shared the belief that digitalisation brings to the region numerous development, business and employment opportunities, which is crucial to stop brain drain we have been witnessing over the past decade, as well as for the post-pandemic economic recovery. The participants also expressed awareness that a successful digital transformation cannot take place without human resources properly qualified in informatics, computer science and other digital competencies, which are currently lacking in the region. It is also important, President Zorčič continued, that structural changes in the labour market are accompanied by a suitable regulatory environment that will prevent possible deviations, including further precarity of work, “as brough to our attention by young people themselves”. The digital transition must be carefully devised and not forced. The participants called for digital sovereignty of our societies, in which digital technology will improve our lives and not cause further social stratification, while supporting sustainable and green development. However, concluded Zorčič, we should not disregard the opportunities our region, with its favourable geographical location and historical-cultural tradition, offers to promising new human resources – the “digital nomads”.

Please find here the Joint Statement, adopted at the 17th Conference of the Presidents/Speakers of Parliaments of the Adriatic and Ionian Initiative.

The Adriatic and Ionian Initiative and its Parliamentary Dimension

The Adriatic and Ionian Initiative (AII) was formally established with the adoption of the Ancona Declaration signed by the foreign ministers of Albania, Bosnia and Herzegovina, Croatia, Greece, Italy and Slovenia gathered at the Summit on Development and Security on the Adriatic and Ionian Seas held in Ancona (Italy) on 19 and 20 May 2000. Today, the AII has ten members: in addition to the above, also Montenegro, Serbia, North Macedonia and San Marino. The Ancona Summit determined the basic areas of common interest, namely: economic cooperation, transport and maritime cooperation, environmental protection, tourism, culture, science, education, and the fight against illegal activities. From the very moment of the AII institution, the goal of facilitating the enlargement of the EU in the Western Balkans was clear.

The AII Parliamentary Dimension, which provides strong political support to the Initiative, takes the form of annual conferences of Presidents of Parliaments. Its chairmanship follows the rotation of chairmanship of the Government Dimension. As a rule, conferences take place in the spring, before the AII Council and the EUSAIR Annual Forum. The first Conference of Presidents of Parliaments was held on 27 April 2001 in Zadar (Croatia), while the last conference was held on 18 and 19 March 2019 in Budva (Montenegro). Due to the difficult circumstances associated with the first wave of the Covid-19 pandemic, no parliamentary conference was held under the Serbian Presidency in 2020.