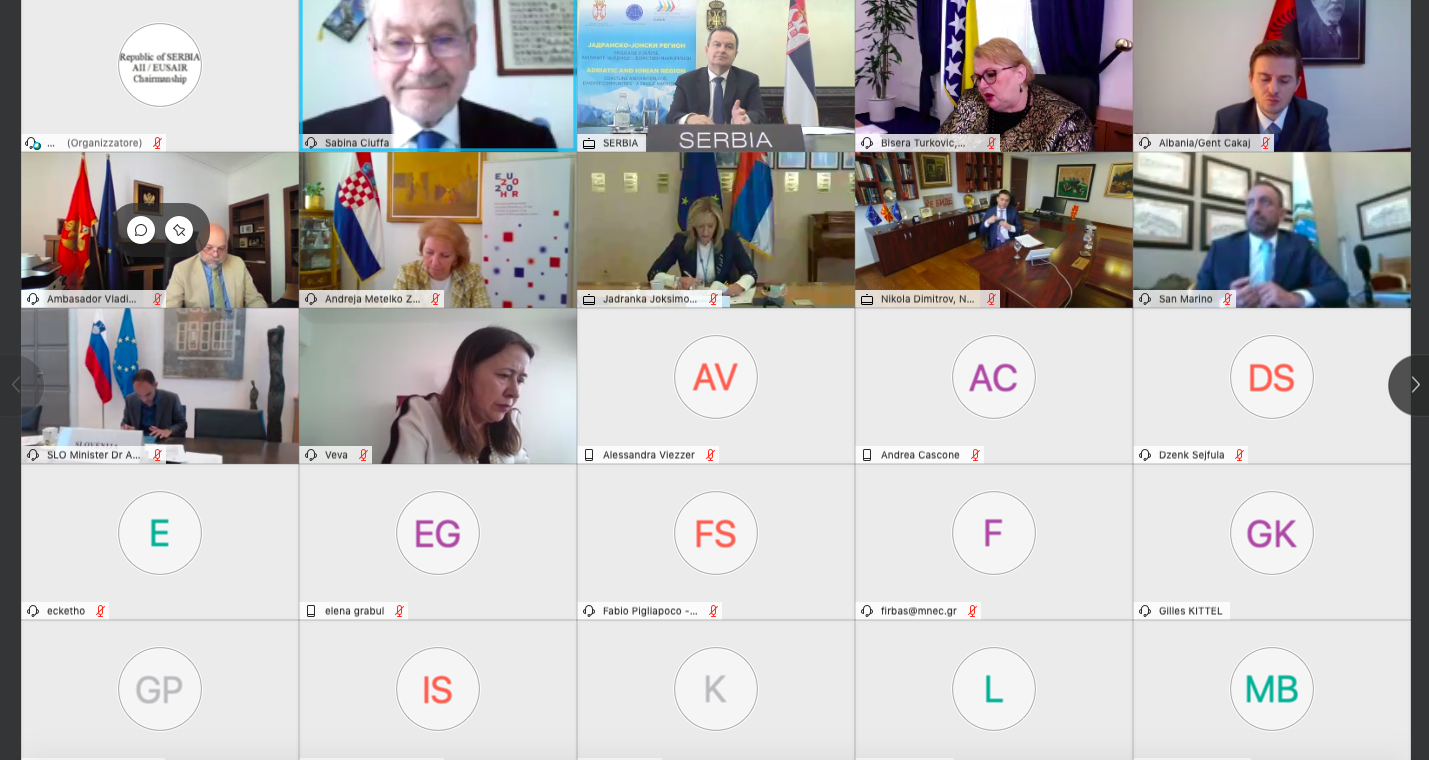 The meeting of the Council of Foreign Affairs Ministers of the Adriatic-Ionian Initiative and European Strategy for the Adriatic-Ionian Region (EUSAIR) was held on May 27th in Belgrade via Videoconference, concluding the successful one-year Serbian Chairmanship of these regional mechanisms.

Minister Dačić opened the meeting expressing regret that the presidency of Serbia, due to the coronavirus virus pandemic, did not end with the fifth Forum in Belgrade.
The head of Serbian diplomacy presented the results that Serbia has achieved during its one-year presidency. The activities carried out are contained in the Priorities and the Calendar of Activities of the Serbian Presidency of the Adriatic Ionian Initiative and EUSAIR, which were adopted by the Government of Serbia. In his presentation, the Minister reiterated the commitment of the Republic of Serbia to the values ​​of the Adriatic-Ionian Initiative and the EUSAIR Strategy.

The Minister also emphasized Serbia's desire to continue deepening cooperation within the Adriatic-Ionian region, emphasizing that during the Presidency they relied on the support and expertise of the Permanent Secretariat of the Adriatic-Ionian Initiative, based in Ancona.

The Minister also presented plans for further active participation of Serbia in the Adriatic-Ionian Initiative and EUSAIR, especially bearing in mind that even after the end of its Presidency, Serbia remains part of the "Presiding Troika".

The Serbian Minister of European Integration Jadranka Joksimović emphasized the importance and commitment to the goals of the Strategy, especially in the post-pandemic period, considering that potential projects supported by EUSAIR can significantly mitigate the consequences of the pandemic on the economy and society of all participants, whether full EU members or in the process of EU accession.

Taking into account that due to the pandemic it was not possible to hold the firth EUSAIR annual Forum in Belgrade in the scheduled time, Joksimović expressed hope that Serbia, with the support of the European Commission and Slovenian partners, who have taken over the Presidency of this regional initiative, will hold the Forum during Slovenia's Chairmanship (i.e. by the end of this year).

AII Secretary General Castellaneta, while congratulating Serbia on a successful Presidency, pointed out that the “future of the Western Balkans is firmly in Europe. These countries still demand for a full and comprehensive integration within the European Union” and that “the AII and its Permanent Secretariat will continue to be an essential tool for fostering regional cooperation by further enhancing policy dialogue and cooperation among the ten AII Participating Countries”, further supporting the European integration aspirations of the Western Balkan countries” (here the full speech).

Amb. Castellaneta further thanked all AII Participating Countries for the renewal of his mandate as Secretary General of the AII for a further three-year period.

Minister of Foreign Affairs of Slovenia Anže Logar thanked Serbia for the work brought forward during its annual Presidency and stated that the main priorities of Slovenia for the incoming AII/EUSAIR Chairmanship will be green cooperation, Western Balkans and EU enlargement.

The Belgrade Declaration, the annual strategic document which acknowledged the results achieved by the Chairmanship and set strategic guidelines for the future, will follow in the coming weeks.